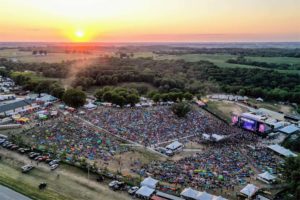 The Hinterland music festival is returning this year. (Photo courtesy of the Hinterland and Dronography Iowa)

Organizers of a central Iowa outdoor music and camping festival that has attracted thousands of fans are planning to bring it back in early August.

“I feel like over this last year there’s been one step forward and two steps back with progress on this virus and I think we are finally at the point where we can see light on the other end of the tunnel and realize there’s life on the other side of all of this,” Summers says.

That doesn’t mean they are moving ahead without precautions. “With everything being so unpredictable — we are making our decisions based on if we were holding the festival tomorrow. So reduced capacity substantially. Over 50 percent less capacity,” he says. “And then we are also doing extra sanitation in high-traffic areas. We are going to require masks, increasing our food vendors’ entrances and restrooms.”

Summers says they will bring back most of the acts they had lined up to play last year and there are several people who bought tickets who will be able to use them. Summers was asked if he’s been getting a lot of calls and questions before deciding to hold this year’s event.

“Yes, people are very much ready for live music,” he says. He says live performances were at the top of a poll he saw on what people have missed the most during pandemic lockdowns. Which he says bodes well for the industry.

“It’s something that you can’t really replicate online or sitting in your living room. And so, I think once everything is safe — which I think for outdoor concerts this summer will be really great for that — things will bounce back,” according to Summers.

He is looking forward to coming out of the survival mode and back into planning for events. “You know we’ve been able to cut some expenses throughout the year and then we’ve also had a lot of help from the federal government and also the state,” Summers says. “There’s been grants that have been out there. My accountant and CPA has turned more from bookkeeping to grant writing.”

Summers says there’s one thing you can do to get live entertainment back on is feet. “Buy tickets. And I am not just talking about my shows. Go find any venue and just buy tickets,” Summer says. “People have been great buying gift certificates and merchandise through all this. But I think what’s really going to get things moving is people buying tickets and showing promoters and producers and venues that people still want to see live music.”

Summers says they will be put people on a waiting list if tickets sell out and they could open up more tickets if the vaccinations continue going well and the COVID-19 situation continues to improve. Headliners for the show include Leon Bridges and Black Pumas, the Avett Brothers, and Tyler Childers.

Tickets go on sale Friday, March 19 at 10 a.m. at hinterlandiowa.com/tickets