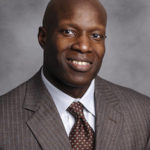 The Missouri Valley Conference Presidents Council has announced that Jeff Jackson – currently the Executive Associate Commissioner of the Big 12 Conference – has been named the Conference’s 10th commissioner.

He will officially begin his new role on July 1, following Doug Elgin as he ends his 33-year tenure as commissioner of the MVC on June 30, 2021.
“The Missouri Valley Conference Presidents Council is excited that Jeff Jackson will serve our student-athletes, athletics professionals, and universities as our next commissioner,” said Mark Nook, president of the University of Northern Iowa and the Presidents Council chair. “Jeff is a visionary leader. And his strong personal values, depth of experience as a student-athlete, coach, and athletics administrator – along with his commitment to the success of student-athletes both academically and athletically – will provide him with the foundation to successfully lead the MVC. The future of The Valley looks very bright.”

Jackson has worked in two Division I conference offices over the past seven years, and he also brings extensive basketball experience from a 30-year collegiate coaching career prior to his entry into athletics administration in 2014.

“I would like to thank the MVC Presidents Council, and its chair Mark Nook, for this opportunity,” said Jackson. “The Missouri Valley is one of the premier conferences in the country that, under the leadership of Doug Elgin, has prospered in a fashion that is in many ways unrivaled. I look forward to continuing the success of this great league and finding new avenues to improve and enhance the experiences of our student-athletes.”

In his present role at the Big 12 Conference, Jackson has had responsibilities as the primary administrator overseeing men’s basketball, directing the Big 12 Men’s Basketball Tournament, and serving as a member of the league’s senior leadership team.