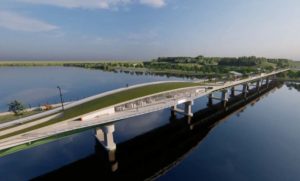 The Interstate 80 bridge that connects the Illinois and Iowa Quad Cities is due to be replaced, though local environmental activists propose transforming the span into a national park.

Chad Pregracke , who leads efforts to clean up waterways, suggests the vacant bridge’s east-bound lane be converted into a walking and biking path, while the west-bound lane would become a land bridge for wildlife.

“I want to put a small herd of bison in the west-bound lane,” Pregracke says. “The bison could literally eat their way over to Iowa and then eat their way back over to Illinois.”

Pregacke says he already has  $300 million in funding for the proposed Bison Bridge National Park. He says the landmark attraction will highlight the Quad Cities and help the region revive its dwindling population.