You are here: Home / News / More arguments made in challenge of Iowa’s second congressional district race 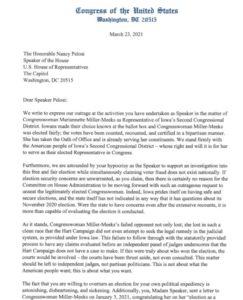 Two Democrats in the U.S. House are publicly calling for the challenge of Republican Congresswoman Mariannette Miller-Meeks’ election to end.

A New Hampshire Democrat last night said “the election’s over” and it’s time for the House Committee on Administration to end its review of Iowa’s second congressional district race. A Pennsylvania Democrat says the House should not dictate the outcome of state elections unless there is “rampant error.”

Attorneys for Miller-Meeks and Democratic challenger Rita Hart have submitted their arguments over how the committee should proceed. Hart’s attorney argues the panel is not bound by Iowa law as it evaluates whether 22 ballots that were not counted should be added to the state-certified tally which showed Miller-Meeks winning by six votes. Alan Ostergren, the attorney for Miller-Meeks, said Iowa elections should be governed by Iowa law.

“The congresswoman has a certificate of election,” Ostergren said, “and that demonstrates that she is the winner of the race under Iowa law.”

Ostergren’s legal brief argues if the House intends to override state election law, they shouldn’t beat around the bush and just say it now. Miller-Meeks’ legal team declined to answer other committee questions, arguing the panel was not following its own timeline for contested elections. Hart’s attorney said there were clearly inconsistencies in the recount conducted in the 24 counties that make up Iowa’s second congressional district and lawful ballots were “unfairly and arbitrarily discarded by election officials.”

This morning, Iowa Congresswoman Ashley Hinson of Marion released a petition signed by 120 fellow Republicans in the House who argue House Speaker Nancy Pelosi is seeking to pad her “razor-thin” Democratic majority by seating Hart instead of Miller-Meeks.