You are here: Home / News / Recalculation shows 82% of 65+ Iowans have had a Covid shot 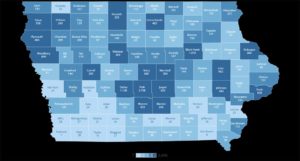 State officials say they made a mathematical error when calculating how many Iowans over the age of 64 have had a Covid shot.

A week ago, Governor Kim Reynolds announced 95% of Iowans over the age of 64 had received at least one dose of Covid vaccine. State officials now say that figure is 82%. The error was made because Iowa Department of Public Health staff were counting doses, not people. That means people who got both doss of Covid vaccine were counted twice.

The state’s vaccination figures do not match the Centers for Disease Control’s data, which shows 76% of Iowans over the age of 64 have gotten at least a first dose of vaccine. Iowa officials say they’re using the latest U.S. Census data and the CDC is using averages based on total population. The CDC ranks Iowa tenth among the states in the percentage of residents over the age of 64 that have had at least one Covid shot.