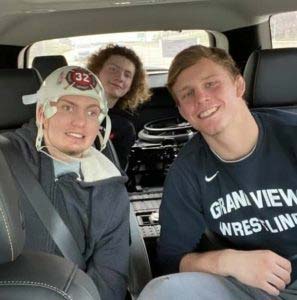 Steele and his brothers arrive in Atlantic.

Residents of Atlantic and Cass County lined the streets of Atlantic to welcome home 17-year old Steele McLaren, who arrived in a multi-vehicle caravan that included his parents, brothers, and a fire truck.  Steele – who is an avid duck hunter – was obviously happy to be home, as he blew his duck call and waved to the people.

The teen was injured October 25, 2020, after he fell out of a moving pickup truck and struck his head on the pavement, while moving a duck blind from one location to another with friends.

Since the accident, more than 35,000 people locally and across the world have followed his progress on the Facebook page Praying for Steele #32strong. His story of recovery has been a catharsis for others with loved ones suffering from a TBI.

Steele’s father, Dustin McLaren talked about the response. “Friends, neighbors, acquaintances, and people from all over the country have sent us — sometimes little checks, sometimes bigger checks. It’s just because somehow Steele has grabbed their heart, and some of them have been through it and some of them know what struggles we are going to be going through,” he says. “And it has been overwhelmingly helpful. Some of them will write letters three pages long telling us about their story or just telling us how Steele has affected their life.”

McLaren said the outpouring of support both emotionally and financially, has been like nothing he’s ever seen before. “We have questions that come up and we’re able to ask people who have been there, done that have experience in this — and we get so many responses that have been really valuable,” according to McLaren. “We’ve put videos on there so people can be right with us every day. It seems to help them, it helps us. It’s all been really therapeutic,” McLaren says.

Barring any setbacks, Steele will continue to recover at home, with his family, friends, and others by his side along the way, and the support of thousands of people will likely never meet.