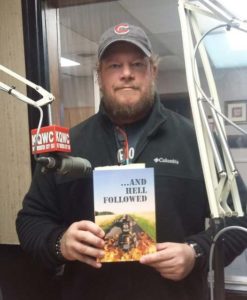 A retired Webster City police officer is now an author.

Phil Queen says his debut book is based on his own real-life experiences as a law officer and as a U.S. Marine. Queen says he didn’t set out to become a novelist.
“I don’t know that I actually started out writing the book in the anticipation that it would get to this point,” Queen says. “It was more a therapeutic-type reason for writing and it took off from there.”

The book is called “…And Hell Followed” which Queen created from a series of adventures during his years in the military and law enforcement. “The book is fiction,” he says, “but it is based loosely off of operations that I was part of, operations that others were part of.”

The book is available on the Amazon and Barnes-and-Noble websites. Queen has another book in the works with publication planned this fall.