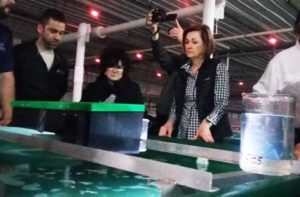 The Dallas, Texas-based company this week began the process of stocking the shrimp at the two Hamilton County locations.

“For them to come in bring the technology that really eliminates the wastewater that the previous facility was dealing with, it is exciting,” Reynolds says.

NaturalShrimp purchased the former Vero Blue Farms building in Webster City last January. Reynolds says one site services as the incubator for the shrimp and the other will grow them to a size where they can be sold to restaurants.