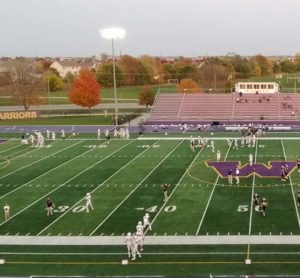 The budgets for Iowa high school sports, music and other activities that have taken a hit during the pandemic may get a boost.

Many schools had dramatically fewer ticket sales for games, reduced student fees, and canceled fundraisers. A bill ready for debate in the Iowa Senate would let school boards shift money from a district’s general education budget to cover deficits in extracurricular programs or co-curricular activities like speech competitions. The options would be available for last year — when there were no springtime music concerts or track and golf meets — and for the current school year as well as the next.

Senator Tim Goodwin of Burlington, a former teacher and coach, led Senate Education Committee consideration of the bill today. The proposal has already won unanimous approval in the Iowa House. Representative Ras Smith of Waterloo said school activities outside of the classroom are an important part of a student’s experience.

“We think this will be extremely helpful in making sure we can get some of our extracurriculars back on track,” Smith said when the House considered the bill.

Some of Iowa’s largest schools lost tens of thousands of dollars in ticket sales as attendance at football and basketball games was often limited to parents and siblings of the players. Governor Reynolds set statewide restrictions on fans in the stands in mid-November as Covid cases surged in Iowa, but lifted those limits in December.