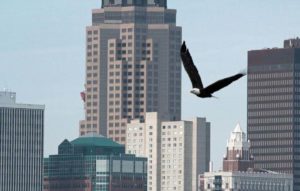 A new federal report finds American bald eagle populations have quadrupled in the past decade, but a wildlife biologist who studies the bird in Iowa says it’s not necessarily good news.

Kelly McKay, who does eagle counts along 80 miles of the Mississippi River — from Clinton to Keithsburg — says our national symbol is flourishing in some areas, but the numbers have been poor along his stretch of river the past three years.

“The eagle populations have made a very strong recovery from where they were,” McKay says. “All I’m saying is, the only thing we have to compare numbers today to goes back to the ’50s and ’60s. We only have data going back to a time when they were on the verge of extinction, basically, they were federally endangered.”

McKay owns the consulting firm, BioEco Research and Monitoring Center, based in Hampton, Illinois, and he leads birding workshops all across Iowa. Bald eagles have been thriving in recent years.

“When I started doing eagle work, back in the early ’80s, there was only a couple of active eagle nests in the state back then,” McKay says. “Now, we have literally thousands of eagles nesting across every county in Iowa.”

One of the most common fish that eagles feed on during the winter months is the gizzard shad, which is a very oxygen-sensitive species. The shad die in great numbers due to oxygen deprivation during the winter, which McKay says is a natural part of the river’s ecology.

“Twenty years ago, I could take you to areas where there were tens of thousands of dead shad on the river. You go to those same areas today and you don’t find any, or just a couple,” McKay says. “There’s been a dramatic reduction in the number of winter-killed shad and if shad make up the vast majority of the eagles’ winter diet, then you have problems.”

People in central Iowa tend to think it’s a positive harbinger that so many eagles are now nesting in areas where they haven’t been seen before, but McKay disagrees.  “Bald eagles belong to a fish-eating eagle group,” McKay says. “These are birds that should be tied pretty closely to aquatic systems and the fact that eagles are going inland is not necessarily a good sign. I think they’re being forced inland because there’s a lack of gizzard shad on the river.”

Due in large part to the use of the pesticide DDT, bald eagles hit a low point in 1963 with only 417 known nesting pairs in the lower 48 states. The new report from the U.S. Fish and Wildlife Service says there are now more than 71-thousand nesting pairs in the country and the numbers are soaring.