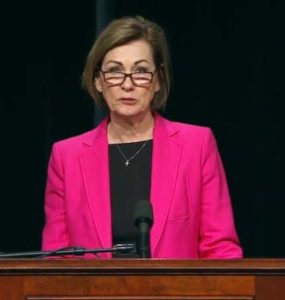 Iowa’s still on track to make anyone 16 or older eligible for COVID-19 vaccine appointments on Monday.

Governor Kim Reynolds today said the state will be seeing a “significant increase” in federal allocations of the vaccine next week.

“In Iowa, it’s our largest allocation to date,” Reynolds said during a news conference. “Nearly 120,000 doses for the state and another 41,000 for Iowa’s retail pharmacy partners, which will total nearly 161,000 doses of vaccine.”

Reynolds said by “the end of next week,” all essential workers in Iowa’s meatpacking, food production and manufacturing sector who’ve been eligible for Johnson & Johnson shots will have had one, so state officials will start to deploy that single-dose vaccine to Iowa college and university campuses.

“Next week, a small allocation will be provided to Dordt University, Northwestern College, the University of Iowa and DMACC to begin student vaccinations,” Reynolds said. “In the weeks following, we’ll allocate larger amounts of the J&J vaccine for this purpose.”

DMACC president Rob Denson said they’re planning to have a mass vaccination clinic on the Ankeny campus next Wednesday, April 7.

“Although the details are being finalized as I speak, we will receive 1000 doses of the Johnson & Johnson vaccine,” Denson said.

Appointments will be offered to DMACC’s full-time employees, instructors and students who’re taking classes on the Ankeny campus this spring.

“It allows us to open our doors even wider and even sooner, so that we can give students the kind of education experience that they want,” Denson said.

Governor Reynolds said the goal is to quickly deliver the single dose Johnson & Johnson vaccine to as many Iowa college faculty, staff and students before they leave campus for the summer.

“This will protect their families upon their return home,” Reynolds said, “and it will ensure they have been vaccinated before they come back to school for the fall semester.”

State officials report over 1.5 million doses of the three available Covid vaccines been administered to Iowans so far. At least 40% of Iowans 18-and-older have gotten at least one dose. Reynolds said Iowa ranks 17th among the states in getting shots into arms.