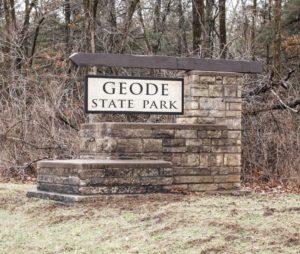 The multi-million dollar lake bed restoration project at Geode  State Park in southeast Iowa is almost finished and the lake will reopen, once the spring rains fill it back up.

Longtime area resident Robert Morrison loves to fish and says Geode was his favorite spot. “I took my grandson fishing there. He caught his first fish there, a little bluegill about three inches long,” Morrison says. “I miss it. I hope they get it back going. I’d like to fish it once more in my lifetime.”

The lake was drained in the fall of 2017 and the Iowa Department of Natural Resources has been working on restoring the lake bottom. DNR biologist Chad Dolan says they’ve been removing decades of built up sediment.

“We had lost about 13 acres of surface area in the lake since its construction back in 1950,” Dolan says. “Given the spring thaw, and pending spring rains that we’re gonna get, the lake will probably fill very quickly.” It may take a few months to fill.

Dolan notes similar work that was done at Lake Darling in Washington County took six years to complete. The first fish will be stocked in the lake this fall. Dolan says a lot of work has gone into creating fish habitats and the DNR teamed up with students at Southeastern Community College to create what he calls octo-habitat structures.

The mass of wires is fish habitat created with the lake restoration.

“A habitat built from a five-gallon bucket, some Quikrete, and some flexible PVC stuck into these buckets to make almost some little trees or bushes,” he says. There is a possibility the lake’s beach could be open this summer.

The nonprofit group, Friends of Geode, wants to restore the old concession building and turn it into a camp store and offer boat rentals, with profits going back into the park. More than $40,000 has been raised so far toward a goal of $140,000.