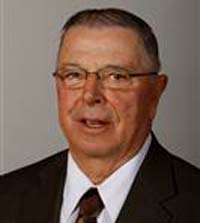 A former state legislator from Garner who was acquitted in a high-profile sex abuse case has died.

Henry Rayhons served in the Iowa House from 1997 through 2014. A month after her death in 2014, Rayhons was accused of sexually abusing his wife Donna.

Donna was an Alzheimer’s patient in a nursing home, with doctors having previously told him that her dementia made her no longer able to consent. Prosecutors and Donna’s daughters from a previous marriage accused him of having sex with her as the case was watched across the nation due to the difficult questions it raised about a woman’s ability to consent to sex while suffering from Alzheimer’s disease.

A Hancock County jury found him not guilty of the charge in May 2015.