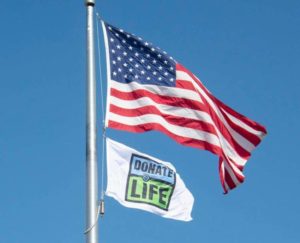 The Sioux City Fire Department is now flying a “Donate Life” flag at one of its stations.

“This is the first one that we are aware of that’s ever happened at a fire station. It’s just a tremendous thing to do as we advocate together with Sioux City Fire to actually encourage people to say ‘yes’ and to donate life,” Jorgensen says.

Paramedic Liz Ford helped get the flag for Station 4. Her husband died in an accident and was an organ donor.

“I lost Ray five years ago and he was a tissue and eye donor. So, blessed it be, there are people walking around who benefited from his generosity — and I couldn’t be happier,” Ford says. Ford says having a conversation about becoming an organ donor is important.

“I think it is extremely helpful to families who might have a tragedy or a sudden death, or even one that might be expected. It’s a way for that family member to live on,” according to Ford. “And it gives peace of mind to that family that is left. It did wonders for me. so, if they have a talk about it sooner rather than later. It’s amazing what it can do for others.”

Jorgensen says there are more than 108,000 Americans currently waiting for a life-saving organ transplant, and 600 of them live in Iowa. “You can register when you renew your driver’s license. If you don’t want to wait that long you can go online to IowaDonorNetwork.com,” Jorgensen says. “And also, we encourage you register to please tell your family, so when they have that discussion in the hospital they are not surprised, they know, oh they are a registered donor.”