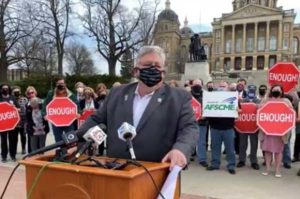 House Republicans are proposing a $20 million increase in the budget for the Iowa Department of Corrections.

The president of the union that represents prison employees says it’s not enough to ensure staffing levels inside the state’s prison system are adequate.

Representative Gary Worthan of Storm Lake leads the subcommittee that developed the House GOP plan, which was approved by Republicans on the panel this morning.

“We support those people that are guarding our institutions and taking of the offenders and standing that if you want to call it a thin blue line or a thin brown line that stands between us and anarchy,” Worthan said.

Republicans are not directly citing last month’s escape attempt and murders of two staff members at the state prison in Anamosa as the reason for the proposed spending increase. Worthan said it’s “the culmination” of a decade of examination of the budget for the Department of Corrections and other agencies in the justice system, like the Department of Public Safety.

“We’re trying to bulk them back up, improve staff numbers, and so on there,” Worthan said.

“Republicans, it’s time to step up to the plate,” Homan said during a news conference on the statehouse steps. “It’s time to fund your facilities in this state. It’s time to make it so that people feel safe.”

Republican lawmakers say the additional $20 million should ensure vacant positions are filled. Homan is calling for reopening a training program for prison staff and for an independent investigation of the murders at Anamosa.

“The Republicans in the Iowa House don’t really understand what happened two weeks ago,” Homan said, “…because those were two brutal deaths.”

Homan is asking the Occupational Safety and Health Administration to investigate the safety situation inside the Anamosa prison. The union leader is also calling for the warden at the Anamosa prison to be fired.