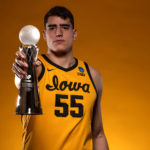 Luka Garza became the University of Iowa’s first winner of the John R. Wooden Player of the Year Award. The announcement was made Tuesday evening by the Los Angeles Athletic Club during ESPN SportsCenter.

“Winning the Wooden Award means so much to myself and my family,” said Garza. “John Wooden was someone my grandfather was friends with, and someone who I was taught a lot about growing up. I studied the Pyramid, and many of his books to try and become the teammate and player that could win a championship. I can’t thank Coach McCaffery and his staff enough for their role in helping me develop on and off the floor. I have had amazing teammates along the way, and I would not be here without them. I want to thank my family for their undying support of me throughout my career. Lastly, thank you to the University of Iowa for changing my life. I am so proud to bring this award to the University of Iowa for the first time.”