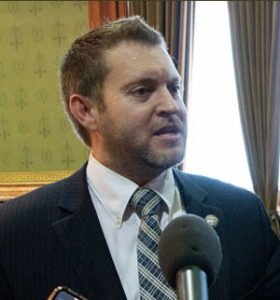 Thirty Republicans in the Iowa Senate have added to and advanced a proposed amendment that says Iowa’s constitution does not recognize the right to an abortion or public funding of the procedure. 2024 is the earliest Iowans could vote on the amendment if the proposal clears other legislative hurdles.

Senate President Jake Chapman of Adel, a Republican, said the amendment would undo a 2018 Iowa Supreme Court ruling that Iowa women have a fundamental right to an abortion under the state constitution.

“It is our responsibility,” Chapman said, “it is our oath-bound duty to rightfully propose to the people of Iowa a constitutional amendment to correct this judicial overreach.”

“Women deserve the freedom from politicians that interfere in our personal lives,” Smith said. “…Likewise, I believe a woman should be free to access abortion with dignity and respect.”

“The desire to protect human life, especially the most innocent and vulnerable, is a worthy cause,” Taylor said, “even when it conflicts with other understandable desires and genuine rights.”

Senator Amanda Ragan, a Democrat from Mason City, said the ultimate GOP objective is to ban access to safe abortion.

“Iowans deserve freedom from political interference in their personal lives,” Ragan said. “These private health care decisions belong to a woman and her doctor.”

The proposal now goes back to the House, where Republicans voted earlier this year on a similar proposal. The House must approve the altered wording Senate Republicans advanced yesterday. The resolution must clear the Iowa legislature this year or next, then again in 2023 or 2024 before the proposed constitutional amendment can be submitted to voters.