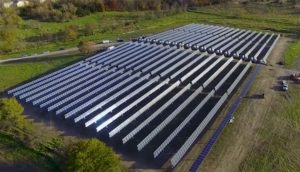 This solar array in Fairfield will be similar to one proposed for Perry.

Alliant Energy plans to build a large solar farm on the west end of Perry on city-owned land, the utility’s first customer-hosted solar project in Iowa.

Zak Hill, Alliant’s senior resource development manager, says the collaboration will bring financial, environmental and educational benefits to Perry and its residents.
“This is going to be the first lease we’ve executed using one of our new renewable tariff programs that the Iowa Utilities Board approved a little over a year ago,” Hill says. “It’s significant that it’s going to be with the city of Perry, with a project we think is going to be an excellent partnership.”

The solar farm will be built on a seven-acre tract of land that’s a remediated brownfield site, meaning, there had been pollution there from industry years ago and it’s been cleaned up.

“I don’t think it’s being used for anything and it’s been on the Iowa DNR’s radar screen for a while — I know they’ve done a lot of work on it,” Hill says. “It should be a really nice environmental story when we’re done building solar and putting that land to good use.”

The solar facility will generate one megawatt of power, enough to light about 260 homes. Residents won’t get a break on their utilities, but Alliant will be forking over about $45,000 a year to Perry as part of the agreement.

“No, there won’t be any discounts on their electricity bills, but the city will receive a lease payment annually over the 25-year lifetime of the contract,” Hill says. “The city will be able to use that for local services and other things.”

The city of Perry will also reap renewable energy credits from the solar project to offset its greenhouse gas and carbon dioxide emissions, Hill says, which will help the city reach sustainability goals.

The solar farm should be operational by the summer of 2022. The Perry project will be a “showcase,” Hill says, and he hopes it’s the first of many Iowa communities to embark on such a venture.