You are here: Home / News / Iowa Supreme Court issues statement on its role in legislative redistricting 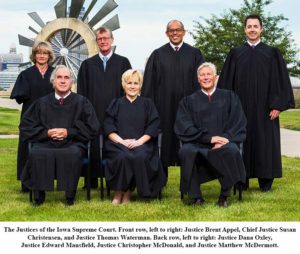 The Iowa Supreme Court has released a statement on how it may handle redrawing Iowa legislative districts this year if — as expected — U.S. Census data arrives past a constitutional deadline.

The statement from the Iowa Supreme Court seems to suggest the court would try to use parts of the state redistricting law the legislature has used for five decades. However, the court did not say which parts of the law it would use, only that it would aim to have the process completed by December 31, 2021.

The maps for Iowa House and Senate districts, as well as congressional districts, are redrawn once a decade to reflect population changes identified by the latest Census. 2020 Census data is due to arrive months late. Under the Iowa Constitution, lawmakers have a September deadline to complete the reapportionment process or that duty falls to the Iowa Supreme Court.

The document released by the court concluded by saying its written statement is “not legally binding” and noted how unusual it is for a court to comment on a matter it later may be forced to rule upon.