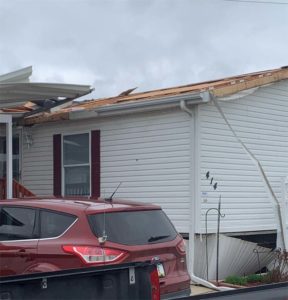 A small tornado has been confirmed with the storm that hit Cedar Rapids Wednesday.

According to the National Weather Service, one person suffered minor injuries when the tornado briefly hit Summit View Village, a mobile home park on the city’s southwest side around 9:15 p.m.

Firefighters reported damage to at least two trailer homes, one of which had the roof torn off. Officials from the National Weather Service determined that the EF-0 tornado briefly touched down in Cedar Rapids.

The survey team estimated maximum winds were around 85 miles-an-hour.