You are here: Home / Fires/Accidents/Disasters / Woman rescued from railroad bridge in Ames 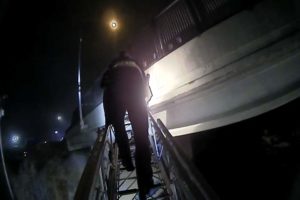 Firefighters rescuing a woman in Ames.

A woman was rescued from a railroad bridge early this morning in Ames.

The Union Pacific Railroad reported a distraught woman hanging off the bridge at Dayton Avenue just before 1:30 this morning. Ames Police Sergeant Joel Congdon says officers held the woman to keep her from falling.

“The first thing was they wanted to kind of contain it to be able to make sure they could hang on to the woman that was in distress. Once they had that secured, they quickly formulated plans and figured out what they needed,” Congdon says. 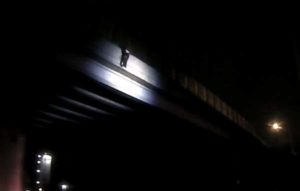 Woman hanging from the Ames bridge.

He says a fire department ladder truck was used to reach the woman and put her in a harness, and then she was lowered down.

Congdon noted the officers didn’t have a lot of room to work with at the scene.

“The area that the officers had to work with, they basically had to stick their arms underneath the railing to grab onto her, so they were dealing with a couple of different variables,” Congdon says. “You had to have your arm be able to fit through a tight spot and I’m sure it was quite the exciting ordeal.”

The woman was taken to Mary Greeley Medical Center for evaluation. Her name was not released.