You are here: Home / Crime / Courts / DCI marks 100 years of solving crimes in the state 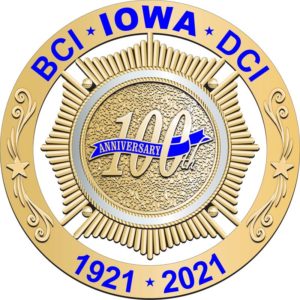 The Iowa Division of Criminal Investigation is celebrating its 100th birthday today.

During a ceremony at the state capitol, Special Agent Adam DeCamp says the agency was created as the Bureau of Criminal Investigation on April 9th, 1921.

“While much has changed with the world since then — the principles that led to the creation of the Bureau remain. The cooperation of effort and purpose between local authorities, the public, and the state,” DeCamp says. 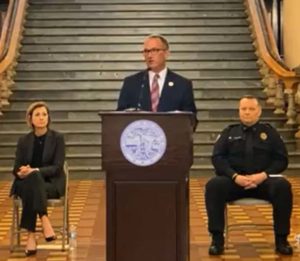 DeCamp says the tasks of the agency now best known by the acronym DCI have gone from chasing the Barrow gang to regulating Iowa casinos. He says the heinous crimes often overshadowed the work of the agency — which he says is to help the people of Iowa.

“For more than 36,000 days, the men and women of the DCI have come to work knowing that each name on a registry represents someone else’s lost innocence. Every piece of evidence represents someone’s broken life. And every phone call in the middle of the night is an invitation to someone’s worst day,” DeCamps says. “Each member of the DCI made a conscious choice to stand with our law enforcement partners to ensure that the guilt should not escape, nor the innocence suffer.”

Governor Kim Reynolds spoke about the longevity of the agency. “A hundred years of uninterrupted service to the people of Iowa is a monumental achievement. One made all the more impressive, considering that the agency has only grown better with age,” Reynolds says.

Reynolds says she gets a report each month from the DCI and says there are many heartwrenching stories. “Stories of pain and brutality, abuse and theft. And of course, heartbreak and bereavement for victims,” she says. ” But DCI’s victim-centered approach demonstrates that there’s no contradiction between world-class investigative prowess and treating victims of profound injustice the way we ourselves would want to be treated.”

Marshalltown Police Chief Michael Tupper spoke about his association with the organization. “I’ve worked with a lot of rock-star caliber professionals serving and protecting at the local, state, and federal level. The Iowa DCI for me had always represented the best of the best, without a doubt,” Tupper says. “The state of Iowa is very fortunate to have high-caliber women and men serving all levels of the DCI.”

He says the relationships the state agency builds with local officers are invaluable.
“We live in a small world — it seems our world gets smaller every day — and for a law enforcement officer, the safety and prosperity of our communities and the state depend on these relationships. In my career, there has been no better partner than the Iowa DCI,” Tupper says.

The BCI joined the new Department of Public Safety in 1939 as a charter bureau. It took over crime scene examination and preservation duties in 1970 with the creation of the criminalistics lab. The law enforcement agencies were unified in 1983 under a larger umbrella and took the Division name.