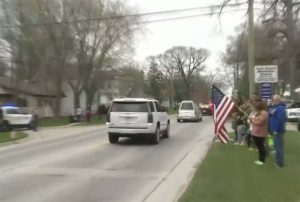 The body of Trooper Smith is returned to Independence. (KCRG TV photo)

On Sunday, hundreds lined the highway into Independence as the hearse carrying the body of 51-year-old Iowa State Patrol Sergeant Jim Smith passed by.

Smith was shot to death late Friday night during a stand-off with a Grundy Center man.

“He was shot and killed, attempting to arrest a barricaded subject,” Bayens said. “He sacrificed himself protecting others.”

Smith, a 27-year veteran of the patrol, was the leader of a regional tactical unit and had entered the Grundy Center home of Michael Lang with a team on Friday night when he was shot to death. After another gun fight three hours later, Lang was taken into custody. Authorities say he’s in critical condition at the University of Iowa Hospitals after surgery for multiple gunshot wounds.

The public safety commissioner paid tribute to Sergeant Smith during a news conference on Saturday.

“Sergeant Jim Smith was a guardian of justice,” Bayens said. “…I’m going to keep saying his name until his sacrifice is seared upon the hearts of anyone that can hear my voice.”

Smith is survived by a wife and two children. Smith, who has been stationed at the patrol’s Oelwein office since 1996, is the first trooper to be shot to death while on duty since 1936.

The man charged with murdering Smith Friday night was “known to authorities,” according to the Division of Criminal Investigation. The Des Moines Register reports Lang had recently been cited for trespassing at a Grundy Center bar where he had been banned due to belligerent behavior. Court records show he was charged with third offense drunk driving in 2009, a felony. Lang unsuccessfully ran for sheriff as a Democrat in 2020. The first degree murder criminal complaint filed Saturday indicates Lang’s father went to his son’s house early in the stand-off and told officers his son had several guns inside, including a shotgun.