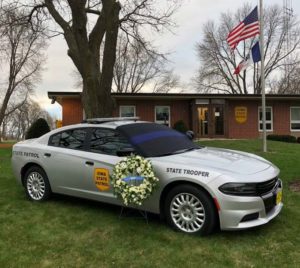 The Iowa State Patrol tweet a message today from the family of slain Trooper Jim Smith.

The message says the Department of Public Safety and Sergeant Jim Smith’s family would like to thank the public for the amazing show of support since he was killed in the line of duty Friday.
It says they have quickly realized that many people are grieving with them.
The Patrol says they have posted a memorial display of  Sergeant Smith’s patrol car at the District 10 Office in Oelwein.  The tweet says anyone wishing to honor Sergeant Jim Smith should feel free to stop by with cards, flowers, and condolences.
Smith was shot Friday while trying to help arrest a man in Grundy Center.