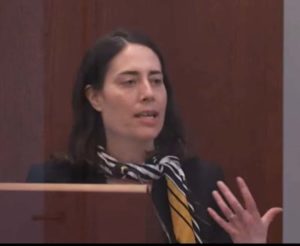 The first of four finalists in the search for a new University of Iowa president visited campus and held a public forum Monday.

Hari Osofsky is the dean of the Penn State school of Law and International Affairs.
“I grew up in the midwest and have spent most of my academic career in peer universities working to advance their public mission,” Osofsky says. “What excites me most about being the University of Iowa’s next president is the unique opportunity to make a difference through leadership here.”

Osofsky was asked about the top challenges facing the Iowa City School. “You know we are in the middle of a global pandemic. And that has a significant economic impact on this university as it has on universities around the country. And not just on the university –but on members of its community. We have had a set of layered crises this year that have caused a lot of trauma and a lot of exhaustion within the community.”

She says the way the school pivots out of the pandemic and recovers is a key issue. Osofsky says ensuring that they are meeting the needs of the students. “I just think we really need to give focused attention to this question of how we support when people start at our university — that they actually get the full education that they are supposed to get and complete their degree,” she says.

Osofsky says another issue is bringing together the political divide. “You know I worry a lot that people have stopped talking to each other who disagree with each other. People have unfriended each other on Facebook,” according to Osofsky. “And I think it is going to be really important for this university as a public university in this state — the flagship public university — to really work across the state, and within its communities, around these issues.”

Osofsky was also asked during her forum about supporting athletics. “I think it’s really important because when you are in a sports arena and supporting a team — it’s a way that people can come together and feel a sense of community. As the president of this university, I would be very engaged in intercollegiate athletics and plan to be a part of that community building,” Osofsky says.

Osofsky will spend today (Tuesday) on-campus meeting with more groups. The second finalist will be announced later today and make a visit and hold a forum on campus Wednesday.

The Board of Regents expects to name a new president from one of the four finalists on April 30th.