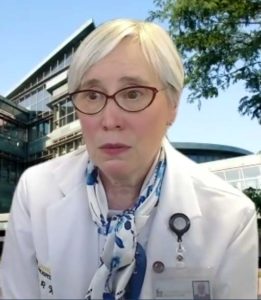 A University of Iowa infectious disease expert says the pause in the distribution of the Johnson and Johnson COVID vaccine is not unusual.

Doctor Patricia Winokur, says the pause allows federal officials to fully review the cause of the severe type of blood clots found in six people who received it. “We’re asking people who have gotten Johnson and Johnson vaccines to watch for headaches, severe abdominal pain, shortness of breath, swelling in their legs. These are some of the signs we’ve seen with clotting disorders,” Winokur says.

She says the U-I is sending out notices to everyone they used this vaccine on.
“Typically what we have seen in the six cases is that the events have happened within about a week to three weeks after the vaccine. So, that is the time frame that is the most important for people to be watching,” she says. This issue appears to be more prevalent in women.

Doctor Winokur says it is good that the problems are not widespread. “Six cases out of six-point-eight million — so that part is hopeful,” Winokur says. Winokur says stopping the use of a vaccine is a part of the process. “This is actually what should happen — because there are rare events that happen with all drugs. These one in a million events we can’t pick up until a drug or vaccine is distributed out into the public,” according to Winokur. “So the fact that we caught these — is actually telling us that our system is working.”

There has been reluctance among some to get vaccinated, and Winokur says this stoppage may impact that thinking. “I think it will cause some people to be more distrustful. I think this is where we really need to talk about that this is exactly what we want to happen,” she says.

Some have wanted the J&J vaccine because it only takes one dose. Winokur says the good news is there are other vaccine options. “Getting vaccinated outweighs that convenience factor. I hope that we can convince people that if perhaps the Johnson and Johnson vaccine isn’t the best vaccine for you — that you will be willing to get a little bit more of the inconvenience — but go for the Pfizer and Moderna vaccines,” Winokur says.

Winokur says the number of the other vaccines continues to increase, and that is good news too. Winokur oversaw the U-I’s Pfizer vaccine trial.