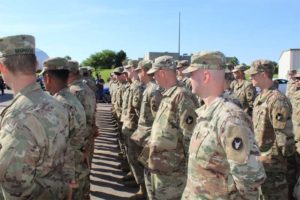 These soldiers who were preparing to leave last year are coming home.

Ninety soldiers from the 113th Calvary Troop C based from the Le Mars return from a ten-month deployment.

National Guard spokesperson Major Katheryn Headley says they were in multiple countries in the southern African command where they supported several operations.

The soldiers will arrive by plane at the Sioux City Gateway Airport at approximately 12:20 p.m. with a small welcome home ceremony scheduled to start at 12:30 p.m. The buses carrying the National Guard soldiers are expected to leave the Sioux City airport by 1:00 p.m. heading north to Le Mars.

Headley says due to the concern of the COVID-19 virus the homecoming ceremony at the Sioux City Armory is not open to the public. “No unfortunately it is not, we are trying to keep COVID restrictions and limitations utmost in our mind, we want to keep the community safe. So the ceremony at the armory is just going to be for military members,” she says.

She says the ceremony will be open to the media. Major Headley says there are ways the public can show support on the return route. She says they encourage family members and members of the public to line up along the parade route to let the soldiers know they are supported.

Soldiers will be released to their families once the official welcome home ceremony is over.