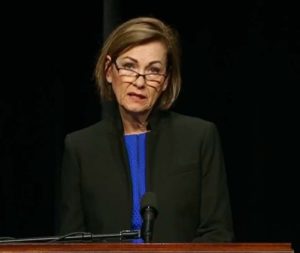 Governor Kim Reynolds predicts the pace of Covid-19 vaccinations will not be slowed by the two-week suspension of the Johnson & Johnson vaccine as possible health complications are carefully studied.

“While the White House reported yesterday on its weekly call with governors the temporary pausing the use of the vaccine should not impact supply going forward,” Reynolds said late this morning. “Fortunately, additional doses of Pfizer and Moderna will be available for nationwide distribution next week and we’ve been receiving an ample supply of both here in Iowa.”

None of the six women who developed blood clots after getting the Johnson and Johnson vaccine were Iowans. Reynolds said the decision to put the administration of that vaccine on pause was sudden and surprising.

“While news of a serious reaction to the (Johnson & Johnson) vaccine is concerning, it’s important that we don’t jump to conclusions prematurely before more details are known,” Reynolds said. “Nearly 7 million doses of (Johnson & Johnson) vaccine have been administered in the United States and at this time, we’re aware of only six cases resulting in the rare blood clots. Currently, the odds of this happening are literally one-in-one million.”

State health officials redistributing the Pfizer and Moderna vaccines to adjust and the governor is again calling for Iowans to be patient as details are finalized.

“Even though Johnson & Johnson doses are on hold right now, we were already planning for a minimal supply over the next few weeks due to the slowdown in manufacturing that had been anticipated,” Reynolds says. “The immediate impact of this decision on our vaccine supply should be manageable.”

The state was only expecting to get 1800 doses of the Johnson and Johnson vaccine next week.

“Putting even one vaccine on hold is disappointing, especially as we’re fast approaching 2 million doses being given and administered in Iowa,” Reynolds said, “but ensuring a safe vaccination process, one that everyone can be confident in, will continue to be a top priority.”

Reynolds and her husband got the Johnson and Johnson shots on March 3 on live TV. During a televised news conference today, Reynolds said she had mild symptoms: a dull headache and fatigue.

“But I was still able to report to work the next day and within 24 hours I was back to feeling 100%, so I’m glad that I did have the opportunity to have the J and J vaccine. I would do it again,” Reynolds said. “Vaccination is the best defense against the virus and, as you’ve heard, the reward far outweighs the risk.”

Reynolds praised Linn County Public Health officials for setting up a 24-hour mass vaccination clinic. State officials say 20 county health departments “refused” the doses of Pfizer and Moderna they could have received this week, so those doses have been reallocated to other counties.

“It should be noted that these counties are doing exactly what we have asked of them,” Sarah Ekstrand, a spokesperson for the Iowa Department of Public Health said in a written statement. “That is, when a county cannot ensure the ability to administer all of the allocated doses, we ask them to decline doses so those doses can be allocated to areas of the state with a high demand. These counties will continue to receive a weekly allocation with the option to decline doses or accept doses as the need within each county may fluctuate.”