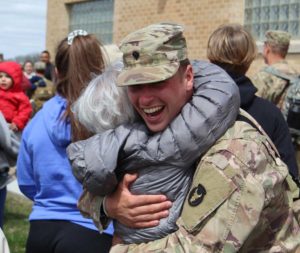 It was a happy homecoming for 90 soldiers from the Iowa National Guard’s 113th Cavalry – Troop C from Le Mars.

Hundreds of people lined the route waving flags, displaying posters, and cheering as the soldiers returned home Wednesday from a 10-month deployment to Africa.

Barbara Grady of Granville was there to see her son, Specialist David Grady.
“I am so delighted and God is so good — and it turned out to be a beautiful day,” Grady says. Grady says she tried to ease any homesickness by corresponding with her son on a regular basis.

“We kept him in touch with the family and hopefully made him feel at home even though he was not at home,” she says. She says there were a lot of letters and texts and messages online throughout the deployment.

Specialist David Grady says it is good to be back home — but added his time at Africa for the National Guard mission was time well spent. “It was a lot of fun. Really helped out a lot, we interacted with the locals lot and helped them out when we could and protected our little FOB (forward operating base) there in Somalia,” he says.

Grady says he has been looking forward to the trip back home for about three months. He says the soldiers had a general idea as to when their mission would be completed, but it was only recently that they learned the specific date for returning home.

After months of military food — he is looking forward to something different.
“Probably eat a big nice juicy hamburger I think — and spend time with my family,” Grady says. Specialist Grady says the guard unit will be off for a couple of months, then it will be back to their regular training schedule once a month.