You are here: Home / News / The rock stars of one of Iowa’s oldest state parks finally reopen for visitors 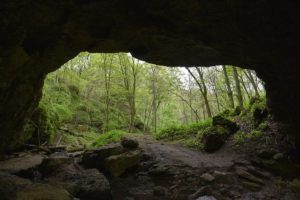 The primary feature of one of eastern Iowa’s most popular tourist attractions reopens to the public today for the first time since 2019.

The caves at Maquoketa Caves State Park were kept sealed off all of last year due to the pandemic.

Ryland Richards, who manages the park, says they’re again ready to welcome visitors, from casual hikers to serious spelunkers, though he reminds, we’re still in a pandemic.

“It’s up to them, whatever they feel comfortable with,” Richards says. “The caves are confined spaces so there’s low oxygen and low light. You can see your breath all the time. If you go down in the caves and there’s 19 people in there, I would not go in the caves. I’d try to go through by yourselves or wear a mask.”

Along with a six-mile trail system, there are more than a dozen caves on the park map and dozens more scattered throughout the bluffs. One of Iowa’s first state parks, Maquoketa Caves in Jackson County has been a popular destination since the 1860s.

“We average about 300,000 people a year and weekends are our busy times, so Saturdays and Sundays, we’ve had anywhere up to about 2,000 people a day,” Richards says. “We like to tell people, if you are going to visit the park, try to do it during the week, or if you do come on the weekend, try to do it earlier in the day or later in the afternoon.” Peak hours are usually between 11 AM and 3 PM.

Of the 13 main caves, three are considered walk-through caves, including the 1,100-foot Dancehall Cave.

“There’s smaller, tighter caves that you have to crawl through on your hands and knees, manhole-size is usually about the entrance to most of those caves and they vary in depth from about 40 feet going in them to about 350 feet for depth,” Richards says. “If you just want to just walk through a cave and look at the oohs and ahhs, we have that, and if you want to crawl through and get dirty, we have that as well.”

The largest cave system in the state also features unique geological formations, like the Natural Bridge, a towering arch 50 feet above Raccoon Creek, and Balanced Rock, a 17-ton rock formation that appears to defy gravity.