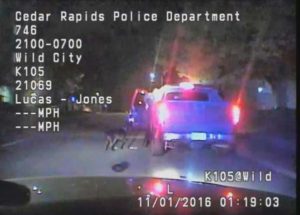 The insurance company for the City of Cedar Rapids is planning to pay an $8 million settlement to a black man who was shot during a 2016 traffic stop.

Jerime Mitchell is paralyzed from the neck down. Mitchell and his wife sued the City of Cedar Rapids and Lucas Jones, the white officer who shot Mitchell.

Jones was fired in June of last year for violating Cedar Rapids Police Department policy during a different traffic stop that happened 36 hours before the one at the center of this case.

Mitchell was pulled over because the light on his license plate was out. Mitchell and Jones fought and Jones fired three shots into the vehicle.

Mitchell’s lawsuit was set to go to trial tomorrow.

The Cedar Rapids City Council must approve the $8 million settlement. In a written statement, city officials said the case has been divisive and they hope to build trust between the community and the Cedar Rapids Police Department.

Mitchell’s lawyer says the most significant outcome from the lawsuit was getting an untruthful police officer fired. The officer’s microphone was turned off during Mitchell’s traffic stop on November 1, 2016 and for the one on October 30, 2016 that led to his firing.