You are here: Home / News / Yard sign fundraiser for family of Garber fire chief who died of Covid 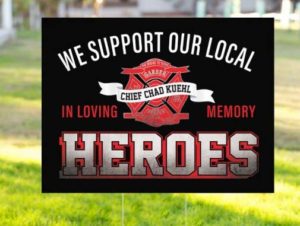 A northeast Iowa company that makes wood prints has created wooden yard signs to honor a local fire chief who died of Covid complications — and raise donations for his family.

Forty-five-year-old Chad Kuehl of Garber died April 10 at University of Iowa Hospitals. He’d been a volunteer firefighter in Garber since 2003.

“We have several employees here who are also on the Garber Fire Department,” said Morgan Adams, lead designer at Shimlee in Edgewood. “When we had this loss we all felt it and we felt we had to do something and we knew sharing support through a sign was the correct way to do that. It just felt right.”

There are two designs. One has the name of the late Garber fire chief and the other is a generic sign to honor all firefighters.

“It’s just been overwhelming and incredible. I love seeing them as I drive through the community,” Adams said. “It just kind of brings everyone together at a time when the whole community feels the effect of the loss.”

On Friday, the company announced the creation of a wooden yard sign in tribute to Sergeant Jim Smith of Independence, the Iowa State Patrolman who was shot to death during a stand-off in Grundy Center.