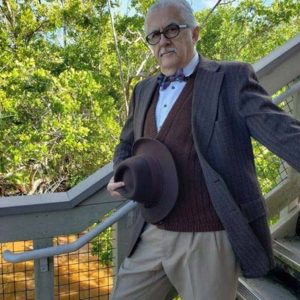 Ding Darling is best known as a two-time Pulitzer Prize-winning editorial cartoonist at the Des Moines Register, but he was also a nationally influential conservationist.

“Most of the time, it was political in his theme, however, he also dove into conservation,” Coulter says. “A lot of his cartoons verged on conservationism and trying to get water and nature to survive longer.” Actor Tom Milligan has appeared as Darling in multiple venues, including at the Iowa State Fair.

In tonight’s hour-long performance, Milligan will visit with the audience — as Darling — on a stage set to resemble his 11th floor office at the Register. While Darling published his cartoons from 1917 through 1949, and he died in 1962, Coulter says his messages from the past are still very much relevant today, especially to Iowans.

“It really shows that conservation has been in the background for most people in this rural state,” Coulter says. “We want to better our environment to help nature.” Why is this Des Moines church hosting tonight’s performance? Coulter says the church’s members have a long history of mission work, including helping refugees to settle in central Iowa and aiding the hungry through food pantries.

“So, the idea of talking about environmentalism and conservation is just one more step that this congregation is taking to show how their ministry to mission is viable,” she says.

The 5 p.m. performance is free and open to anyone, but due to COVID-19, seating in the sanctuary will be limited, so attendees are asked to register if they plan to attend at: https://tinyurl.com/Central-Ding-Darling