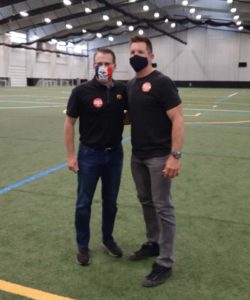 Iowa Lieutenant Governor Adam Gregg was joined by former Hawkeye and retired NFL star Dallas Clark in Sioux City this afternoon to get vaccinated for COVID at a pop-up clinic.

Gregg spoke directly to men. “Guys, why are we falling short? Sometimes we don’t take our health as seriously as we should We’re not proactive. We don’t always get around to making routine appointments for ourselves We don’t like to jump through a bunch of hoops,” Gregg says. “Sometimes as young men we think that we are indestructible, and we don’t want to be told what to do.”

Gregg got his first dose of the vaccine and Clark got his second. Clark appealed directly to men to get vaccinated. 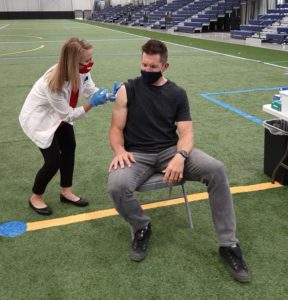 Dallas Clark gets his second dose of vaccine.

“It’s just the right thing to do and I think you have to put away the politics, the this, the that, or whatever reason you’re not getting it. Whatever those reasons are I really hope you reflect and change that mind and become more proactive. Because it’s not about you per se — it’s about what you could possibly pass on to someone else,” Clark says.

He referenced Iowa football as a reason for everyone to get vaccinated. “We have to do our part and we’ve got to curb this because we want Kinnick Stadium filled full of people this fall. We want to get back to our old normal, and I think this is the best way to do that,” according to Clark.

Gregg and Clark were joined by around two dozen Siouxland area coaches and community leaders who were also getting their first dose of the COVID vaccine.