You are here: Home / Agriculture / Group wants to bring pawpaw patches back to prominence 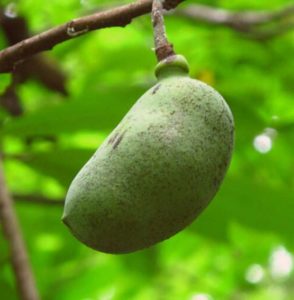 You may know the song that includes the line, “Way down yonder in the pawpaw patch,” but most Iowans have never tasted or even seen the fruit from trees that once thrived in our state.

An effort is underway to educate Iowans about pawpaws and bring the trees back from obscurity. Jason Taylor, executive director of the Bur Oak Land Trust in eastern Iowa, says pawpaws have a long history in Iowa and across much of the country.

“This is the largest fruit that is native to North America and they’re similar in shape to a potato,” Taylor says. “They taste between a mango and a banana, so they have a very tropical flavor to them. These are trees that used to be very prevalent in Iowa and unfortunately, today, there’s very few of them left.”

In recent years, monarch butterflies have become the subject of much concern as their numbers are dwindling, and milkweed plants are key to the survival of the monarch, an important pollinator. There’s a similar story about pawpaws and a threatened insect.

“What we want to do is bring the pawpaw back to Iowa and the reason for that is not just because it’s an awesome tree that is no longer around, but there’s also a specific butterfly species, called the zebra swallowtail. The caterpillar of that butterfly actually eats the leaves of the pawpaws and nothing else,” Taylor says. “So, if the pawpaw goes away, this butterfly goes away.”

The pawpaw is known by a variety of names, including the Appalachian banana, the custard apple, and the banana. Taylor says many people who’ve had pawpaws love the flavor and use the fruit in a variety of recipes, from ice cream to cocktails and specialty beer brews.

“If you like mangoes, you’d probably like a pawpaw,” Taylor says. “The problem with pawpaws is that the fruit goes from fresh off the tree, where it’s the best and most ripe, to pretty much rotten within about three days, so it’s a fairly difficult fruit to actually sell to market.”

The trust is launching the “Foster a Pawpaw” project, where participants can register to care for pawpaw seedlings from May 1st through early October. Hundreds of the seedlings will be planted this weekend as part of an Eagle Scout project.

“We’re going to have community members take those seedlings and grow them over the summer for us, just to be a part of the action,” Taylor says. “Then we’re going to take them back for the wintertime, and then next spring, we’ll work with volunteers to plant those seedlings on our properties.” The cost is $25 for a crate of nine potted pawpaw seeds.

The nonprofit Bur Oak Land Trust, based in Iowa City, was created in 1978 to protect and conserve natural areas for future generations. It owns or manages nearly 900 acres of land in Johnson, Poweshiek and Washington counties — where pawpaw patches will be planted in 2022.