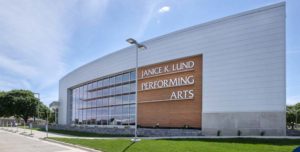 The new performing arts center at Iowa Lakes Community College in Estherville was dedicated last July, but due to the pandemic, the first live concert with an audience is scheduled Sunday, May 2.

“We are so excited to finally be able to use our new building,” said Iowa Lakes instrumental music director Carol Ayres.

The community college traditionally has one spring concert featuring instrumental and choral groups, but due to the pandemic, the first concert next Sunday will feature the jazz band and hand bell choir. The next night, the four choirs at the community college will perform in the new hall. Face masks are mandatory for both performances and social distancing in the audience will be required.

The musicians at Iowa Lakes have recorded performances during the pandemic that were posted online, but Ayres said nothing matches the energy of a performance in front of a live audience.

“I can’t explain it to you, but you know by making music you’re making people happy and you can see that, you know, and then when people return their pleasure with applause it just pumps you up,” Ayers said. “It’s kind of like being cheered for at a sporting event. It gets you all fired up.”

Tickets to both performances are free, but people must call ahead of time to reserve a seat. In 2016, voters in 13 counties approved a bond issue for improvements to the Iowa Lakes campuses in Algona, Spirit Lake, Spencer and Estherville. It included nearly $7 million for a new fine arts center in Estherville. The theater, which has 500 seats, was named for a long time trustee of the community college.