You are here: Home / News / Man walking to raise funds for Alzheimer’s research 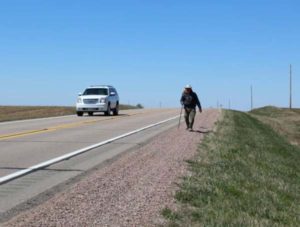 A West Des Moines man is now in his third day of hiking across Iowa as a way to raise money and awareness about Alzheimer’s disease, which claimed the life of his sister.

Sixty-four-year-old Jeff Miller started his cross-state trek on Saturday in Akron and he plans to follow Highway 3 all the way to Dubuque, about 325 miles to the east.

“I’m thinking I’m going to have to average 20 miles a day to get this accomplished, and if I need to take a rest day, I’ll take a rest day,” Miller says. “Right now, it’s three miles per hour. If I didn’t take any breaks, I’d make it a bit faster but, hey, this is a walk, a journey.”

Miller’s sister, Linda, was the victim of early-onset Alzheimer’s. She was diagnosed at age 64 in 2012 and died five years later. Miller says his sister’s condition deteriorated rather quickly after she was placed in a long-term care facility.

“It was a safe place for her to be,” Miller says. “My niece said when she was at home, she didn’t know how to turn the microwave on, the stove, and they were afraid for her. One day, she was wandering around the neighborhood and she was lost. At that point, they put her in the nursing home.”

Miller hopes his walk will raise funds to be directed towards additional research for finding a cure to the debilitating disease. He’s registered on the Walk To End Alzheimer’s website and has already raised $4,000, though his goal was $2,500. Miller explains why he chose to walk across the state.

“I like to walk, I like to hike, I like to backpack,” Miller says. “Last year, I was going to walk across Spain to do the Camino de Santiago pilgrimage. Of course, that didn’t happen with COVID so I thought this year, let’s stay in the country and walk across Iowa and what better way to honor my sister.”

Although Miller is a four-time RAGBRAI veteran, this is his first time to visit northwest Iowa. He says he’s amazed by the geography and terrain, including the Loess Hills.