You are here: Home / News / DNR offers tips for planting a tree 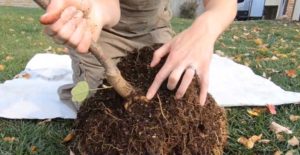 With the weather turning warmer, some Iowans are eager to plant trees in their yards, but there’s an art to the process and common mistakes can mean the tree won’t grow well and it may even die.

Gabbi Edwards, an urban forestry specialist with the Iowa DNR, says planting depth is key. She says to dig down to the first primary roots in the root ball and make sure those are buried just below the grade of the soil.

“Planting a tree too deep can cause roots to circle and eventually strangle the tree,” Edwards says. “Planting them too tall or too high can expose roots to fungal decay over time as the roots are exposed to the air.”

Place a ring of mulch around the tree to protect the roots from freeze/thaw action, and she adds, mulch can help add organic matter to the soil as it decomposes. Mulch should be two to four inches deep, Edwards says, and don’t heap mulch against the stem of the tree.

“It actually retains the moisture,” Edwards says, “and really makes the stem of the tree exposed to moisture more often than it should be which increases the likelihood that you’ll get some decay or fungus which will weaken that stem and increase the likelihood of failure.”

A properly-mulched tree should have a ring of mulch, like a donut, with the tree growing out the middle of the empty donut hole. It’s important to call 811 several days before you dig to allow time for all underground utilities to be marked with flags or spray paint so you can avoid them with the shovel.

Some people will place a five-gallon bucket with a few small drilled holes in it next to the tree. What’s that all about? “It’s kind of the lazy man’s way of watering a tree,” Edwards says. “Especially if you’re planting it in an area like a park and you’re not necessarily going to get back to it or you’re not at it often.

Newly planted trees require more water than established trees. A newly-planted tree should be watered a couple of times a week.” She suggests moving that bucket around each time you fill it with water to keep the soil moist and to help the roots get established and grow.

The DNR has produced a new five-minute video detailing how to properly plant a tree. See it at: <https://www.iowadnr.gov/Conservation/Forestry/Urban-Forestry>