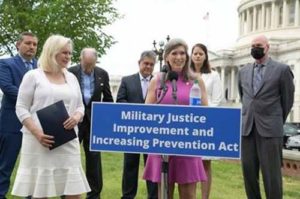 Military commanders would no longer decide whether soldiers accused of sexual assault are prosecuted under a proposal Iowa Senators Chuck Grassley and Joni Ernst are supporting.

Ernst, a veteran of the Iowa National Guard, said sexual assault has “plagued the military for too long” and it makes sense to have a “neutral party” make the decision.

“I’m a former commander, but I’m also a survivor of sexual assault,” Ernst said. “I understand the traumatic events too many of our survivors have faced.”

According to a 2018 Pentagon report, two-thirds of military members who reported a sexual assault said they faced retaliation. Under the plan that will be considered in a Senate committee, commanders will be notified of pending cases, but it will be prosecutors in the military justice system who decide if charges will be filed when a soldier accuses another soldier of sexual assault.

“To help ensure survivors are treated with the dignity, the respect and the justice that they so deserve,” Ernst said.

The bill also calls for more training and education and Ernst said that will hopefully prevent more sexual assaults from being committed in the first place. New York Senator Kirsten Gillibrand, a Democrat, has been working for eight years to build a coalition in the Senate to address the issue. During a Capitol Hill news conference today, Gillibrand noted Senator Grassley was the first Republican to back her effort. Grassley said the time has arrived for action.

“It looks like we’re going to have success this year…If you’re right, eventually win out in the congress of the United States and this is a perfect example of your hard work paying off, maybe longer than it should have, but paying off now,” Grassley said. “Sexual assault cannot be tolerated anyplace, but particularly in the military.”

Gillibrand also credited Ernst for her work on the policy and her effort to line up the votes to get it passed.

“She knows that this system is fundamentally broken,” Gillibrand said, “so her leadership today is extremely meaningful.”

Ernst had previously opposed taking the decision to prosecute cases of sexual assault in the military out of the chain of command, but Ernst said recent reports show the problem isn’t getting better. She cited last year’s independent report showing a pattern of sexual misconduct and violence at Fort Hood in Texas.

Ernst told Radio Iowa she’s talking with three other senators today and within the next week she and Gillibrand expect to have 60 senators as co-sponsors of the proposal.

Ernst and Gillibrand both serve on the Senate Armed Services Committee. They intend to insert the Military Justice Improvement plan into the committee’s annual National Defense Authorization Act.