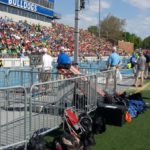 Saturday’s finals sessions will be split and spectators will be ticketed through qualifying participants due to capacity restrictions at this month’s IHSAA & IGHSAU State Track & Field Championships in Des Moines.

The three-day co-ed meet will remain at Drake Stadium on its previously announced dates: Thursday, May 20, and Friday, May 21, with finals on Saturday, May 22. Current attendance limits from Drake University and Polk County Health Department will be in place.

“Both Drake and Polk County were comfortable with two tickets per participant,” said Chris Cuellar of the Iowa High School Athletic Association. “It is not a hard capped number at this point because we won’t know how many kids we have in each session until after the state qualifying.”

Class 2A and Class 3A boys and girls will compete in early sessions each day. Class 1A, Class 4A, and Wheelchair boys and girls competitors will be in the later session each day.

Spectators and participants will be required to clear the facility after each of the six sessions, including Saturday’s finals.