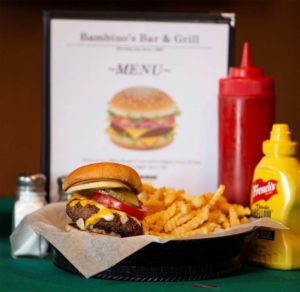 The 2021 winner of the “Iowa’s Best Burger” contest is a bar called “Bambino’s” in the small northeast Iowa town of Ossian.

Co-owner Sue Lienau says she was surprised that their burger won after seeing the burgers of the other nine finalists.

“They all look awesome and I thought, well mine is just a burger, it’s not done up with all different kinds of sauces, it’s just a hamburger. So, I didn’t think that we would ever stand a chance,” Lienau says.

Their top-seller is the “Veggie Burger,” which is an all-beef burger patty on a bun, topped with lettuce, tomato, pickle, and onion. The annual contest is sponsored by the Iowa Beef Industry Council through the Iowa State Beef Checkoff and the Iowa Cattlemen’s Association. 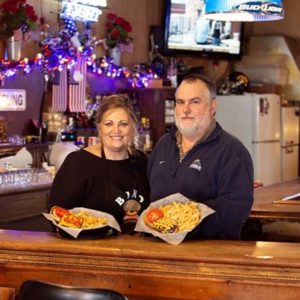 Lienau’s husband Ron purchased the bar in 1982, and they were married one year later. She says there were other places to eat in Ossian when they started — but they outlasted most of them.

“Eventually a small town can’t afford to keep four or five restaurants and bars going. And we’ve weathered a lot of the storms and are still here, and a lot of places have closed,” according to Lienau. “The demand for food is always there — we are a farming community — so we have a lot of farmers who like to come in an grab something fast and they don’t have to use a fork. Because I make noon specials every day too.”

She says they are now doing more food business than bar business. Lienau says they managed to stay open and do carry out business during the pandemic, by splitting shifts.

“And the locals were really, really awesome about know that and supporting that and getting carry out. On Friday and Saturday nights we were getting 220 to 250 people with carry out — and that helped us through,” Lienau says.

Sue has a passion for art and thought that’s what she would eventually be doing, but all these years later is still preparing food for the town. She does add her love of art to one part of the burger — making special designs in catchup on the burgers for customers.

“It could be a birthday cake — if it is their birthday — I draw a birthday cake on there. I draw puppies, I draw tractors, just about anything,” she says. Lienau says that tradition started when she drew ketchup pictures on the burger of a young kid who would come in.

Their four boys have all worked at Bambino’s and she is now teaching her grandsons how to wash glasses and assist customers. Ossian is off Highway 52 between Decorah and West Union, and is open from 9 a.m. to 2 a.m. Monday through Saturday and 3 p.m. to 2 a.m. on Sunday.