You are here: Home / Fires/Accidents/Disasters / Hamburg levee project set to get underway 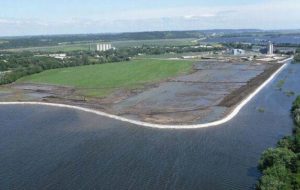 The southwest Iowa town of Hamburg is taking an important step in the continuing recovery from the 2019 Missouri River flooding.

A groundbreaking ceremony will be held at 11 a.m. today for a major levee rehabilitation project.

Hamburg Mayor Cathy Crain says the reinforced levee will be raised eight feet which will help the community in three primary ways.

“The first is building that three-mile levee, and building it that tall, which means that it’s going to be over a hundred feet wide,” Crain says. “In addition to that, the DOT is going to be raising the two roads that go through the levee to the very same height as the levee.”

U.S. Army Corps of Engineers officials and the city signed a project agreement in February to allow raising the levee, significantly increasing the flood risk management benefits the levee provides the city. The expansion is the first project in the nation to utilize the authority to raise the height of a federal levee system.

Floodwaters overtopped and severely damaged the levee two years ago, leading to significant flooding in Hamburg. In addition, Crain says the Iowa Department of Transportation is building another levee southwest of Interstate 29 to prevent water from swamping the interstate, as it did two years ago.