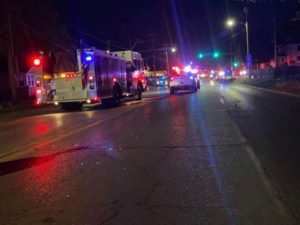 A manhunt is underway in Des Moines for a motorist who evidently ran away from a deadly hit-and-run crash last night.

Witnesses say a car was going fast when it collided head-on with two motorcycles near Des Moines’ East High School about 8:30 p.m. Police say the man driving the first motorcycle and his woman passenger were both killed, while the woman driving the second bike was seriously hurt and is hospitalized.

Reports say the car’s driver and perhaps as many as two passengers left the wreckage behind and ran from the scene. As yet, police report no arrests — and no names were released.