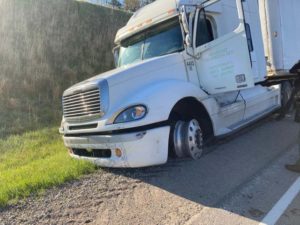 The truck finally stopped after the tires came off.

There was an unusual high-speed pursuit of a semi in Adair County this morning that started along Interstate 80 and included miles of gravel roads as well.

“It became pretty apparent when the semi driver took an evasive action around our trooper and then continued on the interstate at a higher rate of speed that the trooper originally had him at — that the driver of that semi was trying to elude law enforcement,” Devault says.

The pursuit continued westbound on I-80 to the Marne Exit, despite attempts to slow the vehicle by stop-sticks. “During that 20-mile stretch of Interstate 80, I know there were at least two sets of stop sticks that were deployed by the Iowa State Patrol and I believe the Cass County Sheriff deployed stop sticks also — just trying to deflate those tires on that semi a safe and successful end,” according to Devault.

Trooper Devault says the driver exited I-80 north into Shelby County at the Marne — which is a gravel road. The chase continued on multiple gravel roads in southeastern Shelby County, and eventually ended up north of Walnut.

“Even with both front tires deflated, the driver of the semi tried to keep eluding and kept going. Eventually, both tires and tread were completely gone off the front of the semi once he finally came to a stop near Prairie Rose State Park,” Devault says. During the chase speeds along the Interstate reached 90 miles-an-hour and 50-to-70 miles-an-hour on the two-lane and gravel roads.

The driver, 38-year-old Jeremy Samstad, of St. James, Minnesota, was wanted on at least four warrants from as many states, and was taken to the Adair County Jail. Devault says it’s believed the Samstad didn’t stop because of his warrants.
There were no injuries reported and no damage to law enforcement vehicles.