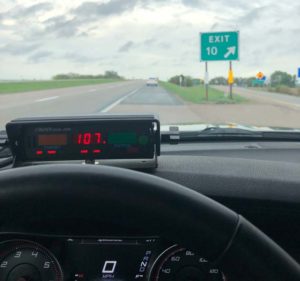 The Iowa State Patrol is reporting yet another case of a driver traveling in excess of 100-miles-an-hour on an interstate highway.

Patrol Trooper Ryan Devault, says the most recent case saw a trooper clocked a motorist on Interstate 29 in Fremont County traveling at 107. “There’s really no excuse he was back here purchasing a vehicle and visiting some family, and was actually headed back to home — I believe he was a military person who was headed back to North Carolina. So I guess just trying to make good time on a Monday morning I guess,” Devault says.

He says it’s not a case of losing track of your speed. “It’s hard to say you didn’t realize you were going that fast when you’re literally blowing by cars left and right,” he says. Devault says there’s a fine and possibly other costs to going so fast.

“Roughly in the $400 range. But you know, not only the fine..maybe the monetary thing is not an issue to some people,” Trooper Devault says. “But when your state department of Motor Vehicles or Department Transportation sees that come through on your driving record, there’s a pretty good chance that your license is going to be suspended for a period of time — which obviously creates some other financial burdens getting to and from work.”

Trooper Devault says incidents of people traveling in excess of 100 miles-an-hour began occurring in 2020 as COVID restrictions kept more people off the roads. He says as COVID cases are declining and people are feeling more confident about hitting the road, fewer people are speeding, but they are still seeing cases of excess speed.

Motorists have been clocked speeding as high as the low 140’s in some cases.