You are here: Home / Sports / Austin Ash returns for the Hawkeyes 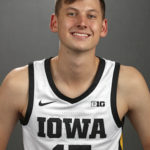 Iowa basketball coach Fran McCaffery announced that redshirt senior Austin Ash will return to the Hawkeye roster in 2021-22 and will be put on scholarship.

“Austin earned this scholarship,” said McCaffery. “Austin is experienced and has been a valuable teammate on and off the floor. He knows our system and doesn’t make mistakes. We are excited to have Austin return for his fifth season.”

The 6-foot-3 guard from Cedar Rapids, Iowa, has been an integral piece of the scout team the past four seasons. Ash saw action in nine games last season, matching his single season high in scoring.

“It was a dream come true to get a scholarship to come back and play for the Hawkeyes,” Ash said. “This is something that has been a goal of mine since I stepped foot on campus as a freshman. It means so much to me and my family. I am excited to get to work.”