You are here: Home / Fires/Accidents/Disasters / DOT finds success with use of warning trailers in work zones 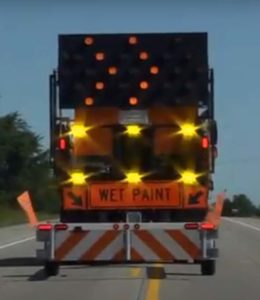 The Iowa Department of Transportation is again using a special trailer with bright lights and loud sounds in an attempt to warn work crews of impending accidents.

The DOT’s Brad Fleming says the trailer known as an attenuator is pulled behind the last truck in a work crew.

“There is a set of lights around the speaker system that as the operator sees a car approaching that isn’t moving over — he will initially trip the panic lights. That’s just a series of higher intensity amber lights that kick on..and we’ve seen quite a bit of response to that,” according to Fleming. “Most of the vehicles I would say, do move over for the panic lights.”

The warning sounds also let the work crews know there could be a problem. He says they are working on upgrading the device so it would automatically go off when a car is too close.

Fleming says the problem boils down to drivers not paying attention.  He says most of the crews out on the road see a significant amount of distracted driving and they believe that is the biggest factor in the need for this system. Fleming says the DOT has 39 audible attenuator systems already in use and they will have 32 more systems in place this year.

The systems are assembled by the DOT at a cost of around $10,000 each. Fleming says the ones in use have already paid for themselves. “In property damage, as well if we can protect any of the motoring public as well any of our employees — it certainly is money well spent,” Fleming says.

Fleming says they know all too well what can happen in a construction zone crash.
“We lost two of our own DOT employees last year to work zone crashes, which hits very close to home for us. The Iowa DOT is like a big family,” Fleming says. “We certainly want to see all of our people go home at the end of the day, as well as everybody traveling on the system.”

The attenuator trailer is designed to take the impact of a crash if a driver does not slow down or move over for the crew.