You are here: Home / Agriculture / Planting speeds ahead along with optimism of better grain prices 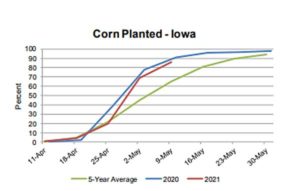 The Monday crop report shows central Iowa farmers have less than 10% of their corn crop remaining to be planted. Corn emergence improved to 22% — up from two percent last week — and Naig says it’s hoped the emergence can continue to improve.

“We’ve seen some cooler and drier conditions that have certainly caused that corn to lay in the ground a little longer than maybe normal. But with a much-needed rain, a drink of water will get that corn growing. And some sunshine of course — we need heat to get things going,” according to Naig.

Naig says the recent rise in corn and bean prices adds to the excitement for farmers getting into the fields. “Farmers are feeling a lot better about prices this spring versus the last couple of years. And certainly, that’s good when you can look at the marketplace and know that you can lock in a profit for the year,” Naig says. “Now with that, some of the input costs have been going up and certainly livestock products have been experiencing some increases in feed costs as well.”

Naig says farmers are always optimistic as the planting season moves ahead — but also know conditions often change. “Weather and markets are two things where the only constant is change, and folks are used to dealing with that,” Naig says.

Naig says the optimism is high that the year will go well and farmers will have a good result when it comes to the harvest.