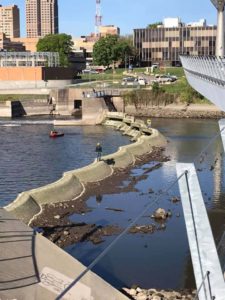 This dam near downtown Des Moines usually has water flowing over the top. (Photo by Nate Niceswanger)

The main source of drinking water for Iowa’s largest city and the surrounding metro area is down about 90% from normal due to the extended drought.

Des Moines Water Works CEO Ted Corrigan says most longtime residents have never seen the river levels this low. “The median flow in the Raccoon River during May is 4,000 CFS (cubic feet per second) and today the river’s flowing at about 400 CFS,” Corrigan says, “so it’s quite a bit lower than it would typically be at this time of year.”

Residents are not being warned to stop watering their lawns, filling swimming pools or washing their cars. “We are not recommending that anyone cut back on anything at this point in time,” Corrigan says. “We always ask that people use water wisely. Make sure that as they’re setting up their irrigation systems that they’re not watering the sidewalk and the driveway and those kinds of things, that they’re not wasting water.”

Corrigan was asked if he sees this as a being a short-term situation. “Hard to say, honestly,” Corrigan says. “There’s forecast rain for the next several days. If we get that, that will certainly help. If we don’t, it will be cause for additional awareness.” The Des Moines Water Works supplies drinking water to about a half-million residents in the capital city area.