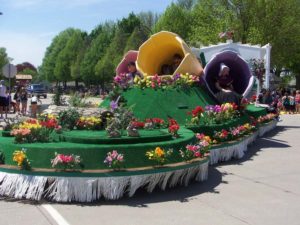 A float from a previous Tulip Festival.

The 80th Orange City Tulip Festival opens Thursday and it’s expected to draw tens of thousands of visitors to the northwest Iowa community over its three-day run.

Last year’s event was canceled due to COVID-19. Mike Hofman, executive director of the Orange City Chamber of Commerce, says people are excited to join in the celebration of Dutch heritage and despite the cool snap, the tulips are in full bloom. 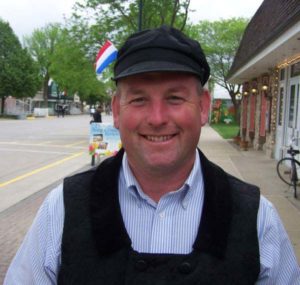 “We’ve had some really nice weather and I think the rain actually helped them over the weekend,” Hofman says. “The beds all through the downtown and even out on the highway here are looking absolutely beautiful.”

Having a year off allowed the festival volunteers to get busy and upgrade many of the floats that will appear in the parades. “We actually were working on a float for the 80th celebration last year,” Hofman says. “It’ll be a new float this year and I think people are really going to enjoy it. It’s going to be a show-stopper. They’ve done a lot of hard work on it the last two years and it really turned out fantastic.”

There will be two parades daily for each of the three days. There will also be street dancing and street washing, per tradition. Hofman says the costumes for this year’s evening productions of “Cinderella” are all brand new.

“They just came in from California and they have not been used anywhere yet,” Hofman says. “From here, they’re actually going to the East Coast and will be on Broadway right after we use them. They’re going to the Broadway production of ‘Cinderella’ and then up and down the East Coast this summer.”

The festival, which runs through Saturday, will also feature a carnival, a car show, a 5-K run, and demonstrations on how to carve wooden shoes.